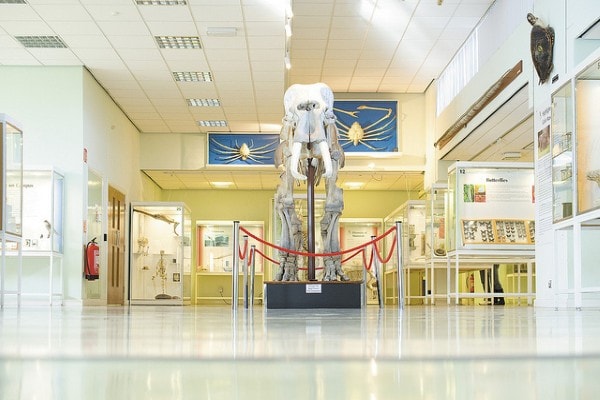 Growing from a donated private collection, the Cole Museum of Zoology allows visitors to take a tour down the taxonomic line via ordered displays of biology including the skeleton of a former circus elephant that seems to be galloping after a flying whale skeleton.

Over 4000 zoological specimens are contained in this fascinating museum. Specimens are drawn from all across the globe, and include an extensive marine collection. Much attention is made at the museum to dissected specimens, showing visitors at first hand the diverse biology of our planet and its diverse inhabitants.

The Cole Museum is part of the University of Reading School of Biological Sciences and is situated at the University's Whiteknights campus. The museum takes its name from Francis Cole, Professor of Zoology at Reading from 1907-1939, whose rare books form a special section of the museum collection. Cole frequently asked overseas visitors for donations, and even asked students to bring back samples from their holiday trips abroad.

Though there are over 4000 items in the museum collection, only about 400 are on display at any one time. These are arranged in taxonomic order, so that visitors can explore the entire range of the animal kingdom in sequential order. The tour begins with the very simplest life forms, like corals, jellyfish, snails, and sea sponge. As you move through the museum, samples become more complex, like butterflies, sharks, and rays. Then its time for reptiles, including samples of dinosaurs. This area shows how dinosaurs are related to birds, and how they evolved over millions of years. The museum tour ends with mammals, and shows how humans are related to other species.

Among the highlights on show is a reticulated python skeleton stretching 5 metres long and featuring 400 vertebrae. This is thought to be the largest snake in the world and was brought to Reading from Singapore. Another unique specimen is a fossil of the largest spider ever known to have existed, and there is n almost complete fossilised skeleton of an Ichthyosaur from the Jurassic period, found in a German quarry.

One of the most popular exhibits, especially with younger visitors, is a 19th century skeleton of an Indian circus elephant, acquired by Professor Cole at a cost of £42 in 1921.

Suspended from the ceiling you can also see a false killer whale skeleton, found in the Dornoch Firth in 1927. There are also a pair of Giant Spider Crabs on display.

These showpiece examples are on permanent display, but most of the other displays regularly rotate, so thee is always something new to see.

The focus of the collection is on comparative anatomy; how different species differ and how they relate. The Cole Museum is one of the most unusual and unique among British zoological collections.

The museum library is normally only open by prior arrangement, but the main museum collection is open weekdays and is f00ree to enter. See the official website for opening times. And while you are visiting the Whiteknights campus, be sure to see the nearby Ure Museum of Greek Archaeology, which is also part of the University.

Location: On the Whiteknights campus, off Shinfield Road, in the Biological Sciences (AMS) building