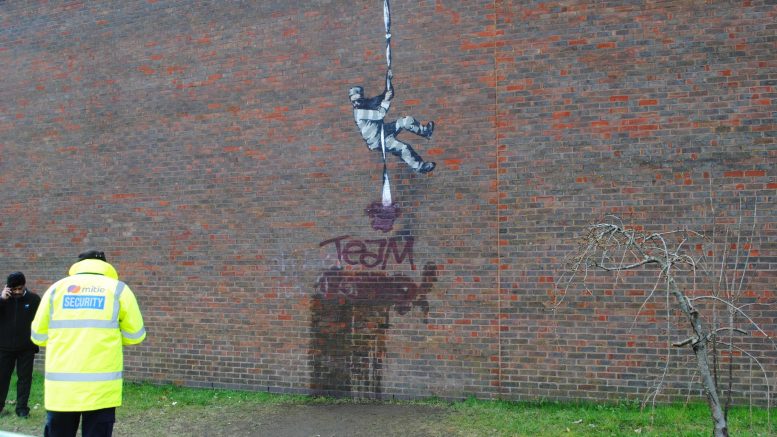 PEOPLE in Reading are outraged after the Banksy mural on the wall of Reading Prison was defaced.

The artwork, which appears to depict a prisoner escaping with a typewriter, appeared on the outer wall of the empty Victorian prison two weeks ago.

Banksy took credit later that week, but on March 16 people woke to find that vandals had covered the typewriter with red paint and written ‘Team Robbo’ underneath.

Reading Borough Council, which wants to buy the Grade II listed prison and turn it into an arts and cultural centre, said it’s “hugely disappointing”.

Robbie Hiller, 30, from Pangbourne, went down to the prison with washing up liquid and laundry detergent to try and scrub some of the red paint off, before security guards told him to stop.

“I was absolutely gutted when I saw what had happened,” he said.

“I know the Banksy story but it doesn’t give people the right to do this. To see this is horrendous.

“I grabbed stuff from home and came down after I heard a cleaning guy on BBC Radio Berkshire, who explained what to do.

“I thought I would come down and have a go, but I’m hoping someone else will sort out the typewriter – I won’t be able to do that.”

Vandals have defaced the Banksy mural in Reading with red paint

The new graffiti appears to refer to the famous street artist King Robbo, who had a long-standing feud with Banksy.

It began in 2009, when Bansky was accused of painting over a King Robbo mural next to Regent’s Canal in Camden.

The artist, whose real name is John Robertson, died at the age of 45 in 2014 three years after suffering a severe head injury outside his flat in London.

Cllr Jason Brock, leader of the council, said: “How anyone can somehow think this is acceptable is completely beyond me, even if this is an extension of a historic feud, as is being suggested.

“There is understandable anger across the town today.

“The vacant Reading Goal site, including the perimeter wall which Banksy’s artwork is on, is private land owned by the Ministry of Justice.

“When the original artwork appeared, the council made contact with the Ministry of Justice to ask it to make suitable arrangements to protect the image.

“We will now be contacting them again to see what action it intends to take.

“I’ve seen many people supporting the idea of restoring the artwork, which I also back in principle.

“As long as the site remains in the Ministry of Justice’s ownership, however, they would need to take the lead in facilitating this.”