MANY developments that would see hundreds of homes built in key locations in Reading have either been given the go ahead, stalled or were rejected this year.

In December 2021, the Local Democracy Reporting Service identified four of the biggest developments that would either move ahead or be decided on in 2022.

They were the huge scheme to build hundreds of apartments in towers above Broad Street Mall, a plan to build more than 600 homes at the old Royal Mail depot site, the transformation of Reading Golf Course into a housing estate, and the demolition of the Bristol & West Arcade and its replacement with a hotel.

You can find out what happened to these prospective and future developments below, and see them in more detail by typing their references in brackets into the council’s planning portal.

Late last year, a legal agreement was signed between the owners of Broad Street Mall and Reading Borough Council for a huge project to build four towers on top of the mall.

The towers would contain a total of 422 apartments, with the scheme being approved by the council’s planning committee in December 2020.

But whether they will ever actually be built is up in the air, as Moorgarth, the company which signed the legal agreement, sold the mall to AEW.

AEW has provided no comment over whether it will build the towers.

A huge plan to demolish the old Royal Mail depot in Caversham Road and replace it with a 620 home development was approved in March.

Even though plans for the site first surfaced in 2018, revisions and other delays meant it only got decided this year.

Called Reading Metropolitan, it involves building seven towers -one of which will be one of the tallest in Reading once built – and seven townhouses.

READ MORE: Plan for 620 homes and one of Reading’s tallest towers approved

During the debate when the development was decided, councillor Simon Robinson (Conservative, Emmer Green) pointed out that it only has 94 car parking spaces across the entire site, which includes office and retail space.

Approval for the development was secured by investment company Hermes.

It is understood the company is searching for an interested developer to actually deliver it.

In March, a plan to build 223 homes at the old Reading Golf Course site in Emmer Green ended up being approved despite over 4000 objections.

Approval for the scheme was won by Fairfax and Reading Golf Club, which subsequently sold the site to housebuilders Vistry Thames Valley, which has submitted a series of ‘reserved matters’ applications.

The biggest of these was submitted in October, and relates to changes to the housing mix, the plots of the houses and parking.

You can view the details and changes using the application reference above.

The long vacant arcade has seen a handful of plans for it to change in recent years.

A plan to replace it with a new build hotel containing 182 beds was scrapped in favour of it being transformed into apartments by current owners Mountley.

While Mountley won approval to convert the upper floors into 26 apartments in October, a connected plan to add two floors to the building was rejected.

You can view the applications using the references below: 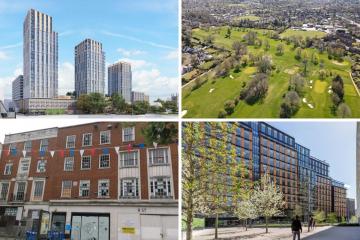