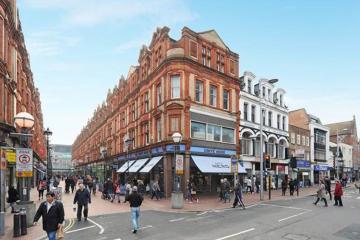 A plan that will transform a corner of Reading town centre, replacing an existing Cuban bar, opticians and more shops is due to be decided soon.

Thackeray Estates, which owns a huge portion of the town centre, revealed plans to transform the corner of Queen Victoria Street and Friar Street to create a new courtyard area, apart-hotel rooms for visitors and a large new hotel this summer.

If approved, it would mean existing businesses would have to temporarily close or relocate and extensive works to both the outside and inside of the buildings would be undertaken.

The developer’s plans are twofold.

At ground level, a character area would be created, with David Owens, construction director at Thackeray Estates, saying the vision is to have businesses conform to a unified branding style that would create a uniform street scene.

The upper floors of the buildings would be converted into 104 apart-hotel rooms.

The principle of this transformation was laid in June last year, when the council’s planning committee approved Thackeray Estates’ first scheme for 41 apart-hotel rooms and the courtyard.

The hotel would be seven storeys tall and located at 138-144 Friar Street.

Notably, the plan involves bringing The Bugle pub back into use since it closed in October 2021.

Although The Bugle building would not be used as a pub, it would be incorporated into the hotel as a character area which visitors can enjoy.

The council gave the building and adjoining Fife Court protected status in July.

Comments from the public have been largely supportive of both plans, with respondents saying it is “a great scheme” and “very much needed in Reading”, with people also praising the designs.

Both QVS1+ and QVS2 have been recommended for approval subject to a legal agreement by case officer Jonathan Markwell.

The legal agreement, called an S106, will define how much in developer contributions Thackeray Estates must pay to the council to fund improvements to council run infrastructure.

If an S106 agreement is not reached, councillors will give the assistant director of planning the power to refuse the applications.

Both applications will be decided at a planning committee meeting on Wednesday, December 7.

You can view the applications yourself by typing their references into the planning portal: